A part of Jones & Associates since it’s foundation in 1984, Derryl has always been an integral part of the company’s success.

Born and raised in Thunder Bay, Derryl graduated in from Hammarskjold High School in 1969 then went to, Confederation College in 1974 for a year of commercial courses.  She received her RIBO license in 1981.

Family is extremely important to Derryl, she has been married for 43 years and has two children Jennifer and Jeffrey.  She also has a grand-daughter Elise and a grand-son named Morgan.

Community involvement and fundraising has always been a big part of Derryl’s life.  Over the years she has been quite active in Scouts Canada, she was part of the Salvation Army committee for 2 years, and she continues to volunteer with the kettle each year at Christmas.  She was part of the Dew Drop Inn committee for fundraising for 1 year raising 1/2 million dollars, for the initial campaign to make the public aware of the needs of the less fortunate; she still volunteer’s there when needed.  She is a CWL member of her church, and always helps out in any fundraising activities or wherever needed.

Derryl’s interests include walking, cooking, reading, travelling, and spending time with her family, especially her grandchildren. 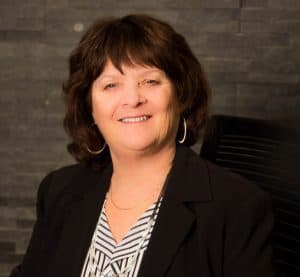