Charlotte also worked as a Summer Student for the Government of Ontario. She loved the office lifestyle so much, she later took the “Office Administration” program at Confederation College. She graduated in April 2020 with a 4.0 GPA.

Charlotte brings a smile with her everywhere she goes, and you can always count on her if you need a friend. Charlotte has quickly learned about the insurance industry and has hopes of completing her RIBO license in the future.

In her downtime, Charlotte enjoys playing and streaming video games, watching Netflix and spending time with her boyfriend and orange cat Khepri. 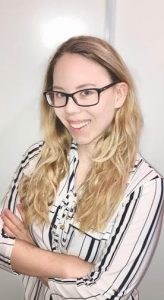