By Leith Dunick, tbnewswatch.com
A promised 15 per cent average automobile insurance rate reduction may not have much effect on Northwestern Ontario insurance bills.

The provincial government’s mandated 15 per cent automobile insurance premium decrease may not make much of a difference to the bills of Northern Ontario drivers.

Jeff Jones, owner of Jones and Associates Insurance Companies, said it’s unclear how the roll-out of the cutbacks will work, but he suspects the majority of the cuts will be offered to southern Ontario drivers, who pay premiums up to 30 per cent higher than drivers in this part of the province.

The reduction is not across-the-board, but instead will require insurance companies to lower their average overall premium intake by 15 per cent.

“It really depends on what insurance companies can offer across the province,” Jones said on Monday.

“If the anti-fraud (legislation) isn’t implemented by the government, it’s going to be very hard to recoup the savings.”

Jones said he understands it may be hard for consumers to understand why drivers in some parts of Ontario see their rates go down when the legislation goes into effect, expected as early as Jan. 1, 2014.

“It can be frustrating,” he said. “I can see it as a consumer myself.”

Unfortunately brokers can’t really tell their customers much more than that. The information simply isn’t coming down the pipeline.

According to the province, the average rate reduction will be split into two segments, an average eight per cent decrease in 2014, the remainder the following year.

The province has cracked down on fraud, including the licensing of clinics that invoice insurance companies, reducing costs by making the superintendent of financial services’ decision binding and forcing companies to offer discounts to consumers with safe-driving records.

But the province is also on record saying it will help “ensure that all regions of Ontario benefit from cost savings.”

“Part of our plan to help reduce costs and pass those savings on to drivers also includes appointing an independent third-party who will ensure that savings are being passed on to consumers fairly,” said Susie Heath, press secretary for Minister of Finance Charles Sousa.

Jones said he expects Northern Ontarians will likely see no more than a two to four per cent reduction in their rates, if that much.

Kenora MPP Sarah Campbell says more needs to be done, but the legislation announced earlier this week, is a positive news.

“While it is not the immediate 15 per cent cut that needs to be made, it is a step in the right direction. By next August, the average consumer will see a savings of a little more than $100 per year. Once the full 15 per cent is achieved, consumers can expect their annual auto insurance bill to drop by roughly $200,” the NDP representative writes in her weekly column.

“Since the Financial Services Commission has to approve any rate increases, fears of companies increasing premiums in advance of the reduction should be unfounded, as will be suspicion that premiums in the Northwest will rise in order to reduce premiums in Southern Ontario.

“Arguments like these have been used by the Conservative Party, who voted against the motion to reduce premiums, in hopes of creating cynicism in order to protect insurance companies’ already soaring profits.”

For more on this, check out the youtube video from TBT News:

Share on TwitterShare on FacebookShare on PinterestShare on LinkedInShare on Email 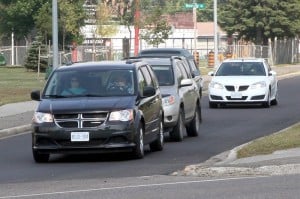